Premier League Five Things: Spurs must do all they can to keep hold of Dele Alli 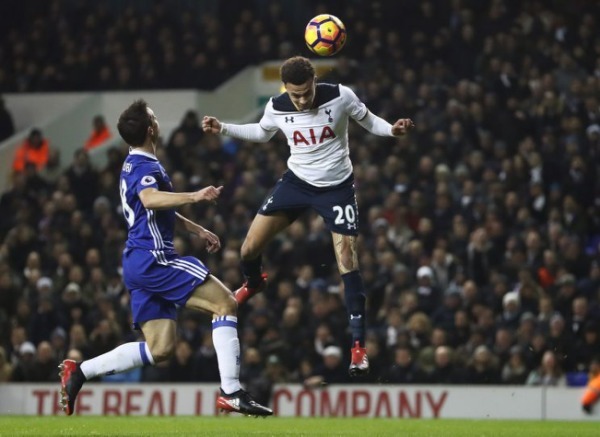 Dele Alli must be protected by Spurs

There is probably no better English midfielder than Dele Alli. Better than that alone, is that he’s being kept far away from the worst English players still in the Premier League, and he has one of the best managers to counteract the damage that will be done to him by the egregiously pointless Gareth Southgate.

He has fire in his guts, but has, for the most part, sublimated any irresponsible urges this season, compared to last, when he was regularly closer to a yellow card than a blemish-free performance. Instead of dulling his effectiveness, it seems to have come in tandem with more guile on the pitch. Alli scored a superb, Scholesesque header at the end of the first half, and recalled Alan Shearer with his second at the back post.

[CHELSEA FAN VIEW: HAVE SPURS DISCOVERED A CHINK IN THE ARMOUR?]

[ALLI AT THE DOUBLE AS SPURS STOP CHELSEA’S WINNING STREAK]

If he continues like this, there is no reason to think that not just Chelsea and Manchester United will want his energy, goalscoring and vim, but perhaps the best clubs abroad too.

Spurs have briefly threatened to become a truly excellent side, most recently under Pochettino last season, when they had Harry Kane’s goals dragging them to victory. Before then, it was Gareth Bale’s dominance of an otherwise mediocre team. Now, they have Alli. For a side that is relatively poor compared to the richest teams in England, making the most of these rare talents is both essential and difficult. Pochettino must find a way to build a side around him, and persuade him to stay at White Hart Lane at a time he seems on the cusp of outgrowing them.

Chelsea may be suffering from fatigue after a rare busy spell

Chelsea’s 3-4-3 was a success for a few reasons. It helped make the most of a relatively static midfield. It provided width with wing-backs who were only required to put the effort in every weekend, rather than in Europe too. Eden Hazard could focus on what he was best at being brilliant at attacking. It also made the defence solid where once it had been vulnerable. Few strengths were compromised, some were improved, and plenty of weaknesses were addressed.

As a result, Chelsea flourished and teams got battered. The advantage was extended by the number of times they took the lead, affording them control of the game as their opponents would chase an equaliser. But there was no great rotation, and as the winning streak continued, goals started to leak, and the initiative was occasionally ceded. None of this is any great shame or failure, simply a reflection that winning consistently in football is an exacting habit.

The Christmas pile-up coincided with more goals conceded, and with Chelsea having to fight more than they had in the previous weeks, they have started to look vulnerable. Against Spurs, this was an exceptionally fit side ready to take advantage, but it serves as encouragement for the chasing pack.

Spurs need to reinforce to be sure of Champions League qualification

While Manchester United and City are making life hard for themselves, Chelsea, Liverpool and Arsenal seem solid bets for the Champions League spots. That leaves one space left for Spurs and the two Manchester sides to fight over. Looking at Spurs, they look like the most effective team, one where everyone knows their role and one where no player looks like a dreadful weak link. Every player against Chelsea did their job, and their defence is currently the best in the league. Pochettino is an impressive manager to have had his back four functioning for two years, with occasional changes in personnel not proving disastrous.

That’s their problem, as the transfer window gears up. They have no obvious weaknesses to be addressed, but improvement is essential if they are to give themselves the best chance of a top-four finish. Pochettino’s biggest challenge for the next month might not be managing his side, but finding an affordable player who can make an instant improvement to Spurs.

Chelsea need to refocus on a new winning habit

Chelsea’s lead is now set at five points. There’s something psychologically satisfying about a lead that is a multiple of three. It shows how many games you are allowed to lose before it matters. Six is a solid number, as it allows two slip-ups before you can be overtaken. The lead for Chelsea is five, and they logically remain favourites for the title.

With the FA Cup next up, Chelsea can relax, and look down at the chasing pack. They can have an extended rest after a hard Christmas period, with Peterborough offering them a chance to rotate and almost certainly be victorious. Losing this winning run will and should hurt, at least it should if they are set on achieving something special, and taking advantage of their schedule ruthlessly. They are fortunate that they can take a break and enjoy a rest for a week and a half, but the test has only really now just begun. It is far easier to be confident when you are winning as a habit, which is one they now must rediscover.

Chelsea were oddly vulnerable in defence

Ever since Jose Mourinho had his first spell at Chelsea, they’ve been known for being miserly in defence. Their weakest moments were when John Terry looked vulnerable. Under Rafa Benitez, Andre Villas Boas, and Mourinho’s final season. Conte, as discussed above, fixed that for them with his three central defenders. But that has started to fray.

This is a relatively small sample size, obviously, and conceding to Spurs is something most sides will do when they face them. But Chelsea weren’t prised open by incredible moves of speed and guile, but by failing to track runners for crosses. These basic errors could derail their title challenge if they are not resolved, and if clubs get the chance to pepper the box with crosses.