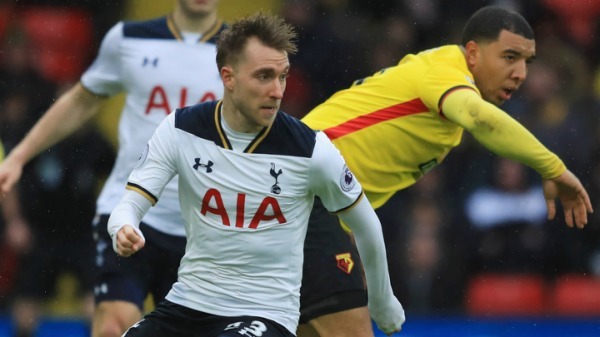 Christian Eriksen believes Tottenham's performances this season have been even better than last term, when they took their Premier League title challenge to the final stages of the season.

Spurs ultimately finished third behind champions Leicester City and runners-up Arsenal after an impressive campaign, but have not received the same plaudits for their form this season.

However, Eriksen insists Spurs are as confident as ever and feels the club have in fact improved on 2015-16, despite sitting behind leaders Chelsea, as well as Liverpool and the Gunners, in the table.

"I don't think [confidence] has ever been gone really," Eriksen said to Sky Sports.

"I think it has been how people looked at it from the outside saying, 'Oh, they don't look as good as last season' - but nothing has really changed.

"It's still the same players, the same style of play, and some of the games we have maybe been in even more control than last season.

"It's just that last season was new, and now people know. I think our biggest strength is to control the game, and finish the game off, not letting the other team in.

"I think we are in a very good position, first of all as to how we want to play. Any team wants to be up there, but we are not too far off anything. For us, we must keep on fighting until the end."

Eriksen thinks the competitiveness of the top six will mean the sides that finish the campaign near the top of the table will have had to earn it.

He added: "This season we knew it would be very different to last season. We knew it was going to be very, very hard, whereas last season a lot of the top teams didn't really win their games. We ended up very high.

"But you can see this season it is already very hard, everybody is fighting for it so it will be a very, very competitive top six and we really need to be sharp to be up there."