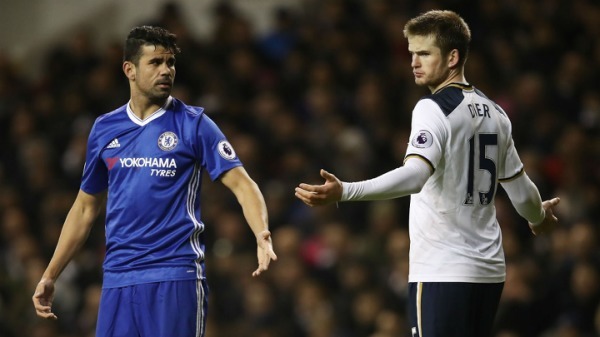 Tottenham defender Eric Dier conceded it was a sweet feeling to halt Chelsea's stunning winning run given the recent feisty affairs between the two sides.

Headers either side of half-time from in-form England star Dele Alli gave Spurs a deserved 2-0 victory over the Premier League leaders, who were forced to settle for a record-equalling streak of 13 straight top-flight victories in the same season.

Alli at the double to derail Conte's record men

One of the major steps in that run for Antonio Conte's men was a come-from-behind win over Spurs at Stamford Bridge in November - their London rivals' first league loss of the campaign - while a late collapse and a 2-2 draw at Chelsea ended the title ambitions of Mauricio Pochettino and his players last time around.

"This game was huge for us for many different reasons," Dier, who was deployed in a back three to help successfully match Chelsea's fruitful 3-4-3 formation, told Sky Sports.

"We have a history with them now from last year and obviously this season they stopped our unbeaten run in the Premier League.

"To stop their winning streak, that was nice, and at the same time to close the gap on them.

"There are bigger things in our minds than just stopping them. We want to do well ourselves and that was a big statement from us. Hopefully we can go even further."

Alli now has seven goals in his past four matches and three consecutive braces, and he felt toppling Chelsea - who are still seven points better off than third-place Spurs at the summit - represented a "big statement".

"This is a massive game. I don't think there's any hiding how big this game is for Tottenham, for the club and for the fans as well," he added.

"There were a lot of things that went into it today and you saw that from the performance of the boys. We fought from the first whistle to the last and it was a deserved win.

"It's a big statement for us but we're happy to stay under the radar and take each game as it comes. We did that last season."