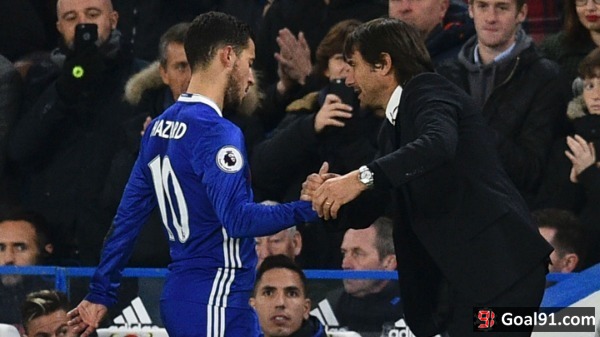 Antonio Conte labelled Eden Hazard as a "complete player" after the Belgium international inspired Chelsea to a 5-0 hammering of Everton at Stamford Bridge.

Hazard continued a fine run of form by scoring twice in a terrific showing, while Marcos Alonso, Diego Costa and Pedro were all on target as Chelsea went top of the Premier League by sweeping aside the Toffees.

The Chelsea faithful awarded Hazard a standing ovation when he was substituted by Michy Batshuayi with 10 minutes remaining.

Hazard has now scored in four consecutive league matches and Conte rates his star man among the best when he displays the sort of form he has shown in recent weeks.

"Eden played an impressive game," he told BT Sport. "We know he's a great talent. I see he is working a lot for the team.

"He is a complete player when he plays in this way."

Chelsea have now won five league matches on the spin during which time they have not conceded a goal and scored 16.

Conte has been particularly pleased with the defensive improvement after Chelsea failed to keep a clean sheet in their opening six league matches, but the Italian is disappointed their momentum will be halted by the international break.

"I'm pleased, because to win in this way is fantastic," he said. "We played confidently, with a good intensity. All the players played in the right way with the ball.

"We created many chances to score. Also, this is the fifth clean sheet in a row. It's fantastic because, if you look at the past, it is incredible to reach this number.

"It's a pity that now we have to stop for the international break. I wanted to continue.

"I am pleased for the players, because they were fantastic. I am pleased, but we must continue to work very hard."