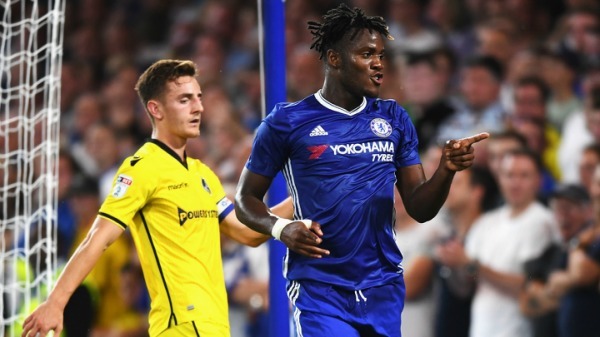 Michy Batshuayi scored twice as Chelsea survived a scare against Bristol Rovers to reach the third round of the League Cup with a 3-2 win at Stamford Bridge.

The League One outfit won the last meeting between the sides back in 1981, but there was to be no repeat on Tuesday despite a battling performance in which they twice halved a two-goal deficit to keep Chelsea on their toes.

Antonio Conte's side, entering the competition at this phase for the first time since 1996, took charge of the game during the first half thanks to goals from close-season signing Batshuayi and Victor Moses in the space of two minutes.

Defender Peter Hartley headed in a lifeline for the visitors on 35 minutes, and though Batshuayi struck again before the break to calm some of the nerves among the home fans, Ellis Harrison's penalty gave Rovers hope again.

Rovers' fans did their utmost to try to inspire an equaliser, but Chelsea went largely untroubled through the closing stages to book their place in the next round.

Chelsea, who handed a debut to full-back Ola Aina, started strongly in warm conditions at Stamford Bridge, with Pedro and Cesc Fabregas both coming close with efforts from distance.

Loftus-Cheek, deployed in the more advanced role advocated by Conte in recent weeks, rattled the post with a fierce drive as Chelsea continued to dominate.

Rovers had defended stoutly but were undone by poor concentration in the space of two minutes.

Loftus-Cheek fed the run of Nemanja Matic and his ball into the area fell to the feet of Batshuayi, who blasted high into the net from 12 yards out with a fine left-footed shot on the turn.

And with 31 minutes played, Chelsea doubled their lead. Cesar Azpilicueta turned Pedro's centre from the left back across the six-yard box where Moses was on hand to tap in.

The visitors stunned Stamford Bridge four minutes later, however. Chris Lines curled a superb free-kick into the area from the right and Hartley rose highest to head beyond Asmir Begovic's right hand.

Batshuayi made Conte's half-time team talk a little easier shortly before the break, timing his run into the area perfectly to meet Loftus-Cheek's cut-back and rifle beyond Steve Mildenhall, but Rovers scored a second just three minutes into the second half.

Pedro bundled over Stuart Sinclair as he raced clear into the box, and though he was spared a red card thanks to new regulations concerning fouls by the last defender, Harrison converted the penalty to leave Chelsea feeling anxious again.

Harrison blasted over the bar after a good counter-attack before substitute Jermain Easter was denied by a good Begovic save, but Rovers' hopes of a stunning comeback failed to materialise as Chelsea held firm to progress, despite a third goal for Batshuayi in the dying moments being ruled out for an infringement.