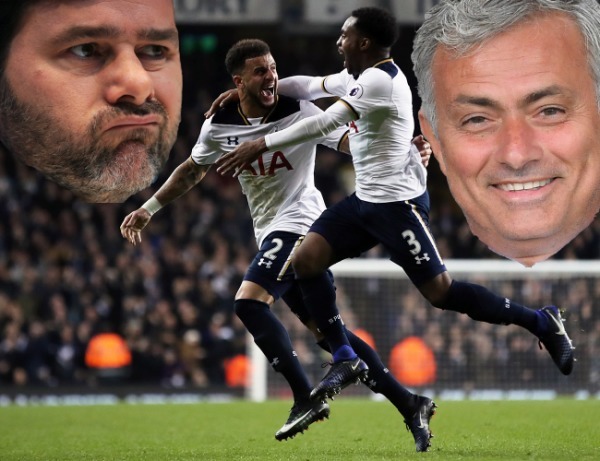 Marauding has never been such a popular trait for a full-back. If a full-back doesn’t maraud these days, he might as well give up and be something else, like a centre-back or a jazz trombonist. That’s why Kyle Walker and Danny Rose have become such hot properties in the past 18 months – the Tottenham duo love a maraud, and in the current climate this makes them more irresistible than a pair of panda fur-lined slippers. Even to Jose Mourinho, a man who has traditionally preferred his full-backs to keep their marauding to a minimum.

Today’s Sun reports that Manchester United manager Mourinho is ready to take on his Man City rival Pep Guardiola by making a £60m move for Rose and Walker (that’s £60m for both, not each – this isn’t China).

Guardiola had allegedly earmarked the Spurs pair as the solution to his own marauding issues, but Mourinho is “determined to put a spanner in the works” of that plan by launching his own bid.

We’re not sure if anyone has consulted Tottenham chairman Daniel Levy about any of this, but it doesn’t seem likely he’d be keen on the plan – even if his club stands to make roughly a 1,000 per cent profit on a couple of players they plucked from the lower leagues. The Sun suggests Levy “might be willing to cash in” on one of his full-backs, if not both. The Sun is often very wrong though.

A more likely January transfer, albeit a slightly odd one, could see Swansea’s Fernando Llorente move to Chelsea. It may have seemed like a made-up thing when it was first mentioned, but the Star seems convinced it will happen (although the Star is very often wrong too, to be fair).

The tabloid says Spanish striker Llorente will move to Stamford Bridge on loan and the Swans will replace him – not with Michy Batshuayi, because that would be too simple – but with Michy Batshuayi’s brother. That’s Aaron Leya Iseka, a 19-year-old Anderlecht forward who spent the first half of this season at Marseille without scoring a goal.

Barcelona midfielder Ivan Rakitic seems less likely to be moving to Man City today (Mail), so Pep Guardiola is going to move down his wish list and buy Jack Wilshere instead (Star). Quite a few places down his wish list, you’d expect.

Manchester United are playing hardball with Everton over Morgan Schneiderlin, with the Red Devils rejecting the Toffees’ bid of £19m and demanding to recoup the £24m they paid for him (Express). Which is fair enough, because he wasn’t a disappointing signing at all.

Elsewhere, West Ham will allow Spanish goalkeeper Adrian to leave the club this month and want to bring in Joe Hart to replace him (Sun), Man City, Man Utd, Tottenham, Arsenal, West Ham, Southampton and Aston Villa are all vying to sign promising Barnsley right-back James Bree (Mirror) and Hull City are poised to sign Everton flop Oumar Niasse on loan (Liverpool Echo). For Evertonians, there could be no bigger news.