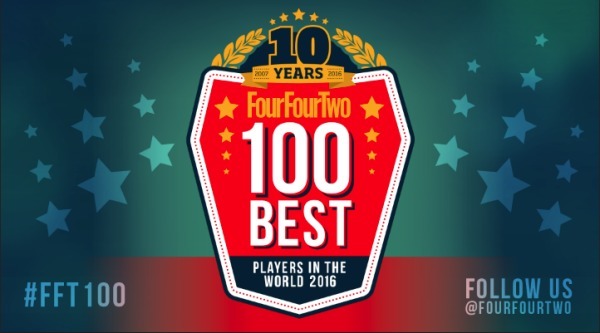 The Portuguese star also won the award in 2008, 2013 and 2014 and has been placed either first or second in each of the last six editions. He converted the winning spot-kick in May as Real Madrid beat Atletico Madrid on penalties to secure an 11th European Cup and second Champions League title in three years.

And the 31-year-old followed that up by helping his country land a first major championship in July, as Portugal beat hosts France in the final to win Euro 2016.

Ronaldo is joined in the top 10 by Madrid team-mate Gareth Bale, who led Wales’ unlikely run to the semi-finals in France before they bowed out to Portugal.

But it’s Real Madrid’s arch rivals Barcelona who can boast more members in FFT’s top five for 2016, with Messi, Luis Suarez and Neymar making up three of this year’s elite quintet. Atletico Madrid’s Antoine Griezmann ensures that it’s a clean sweep for La Liga; the Frenchman firing the Rojiblancos to the Champions League final with seven goals and ending Euro 2016 as the Golden Boot winner.

Bayern Munich are the most represented club for a third straight year, and do it in style with 15 players a record high for any team since the Top 100 began in 2007.

Real Madrid are next with 11, while Premier League clubs aren’t hogging the game’s leading lights like they once were. Manchester City and Chelsea saw eight of their squad selected in 2015 and 2014, but in 2016 no more than five players feature from any one English club. Arsenal, Chelsea and Spurs each have four.

Leicester feature in the FFT100 for the first time thanks to their fairytale success, and Romelu Lukaku’s inclusion is the first for an Everton player since 2013.

England equal last year’s tally of four lions despite their humiliation against Iceland, as Jamie Vardy and Dele Alli displace Joe Hart and Wayne Rooney – making it the first time in Top 100 history that Rooney has missed the cut.