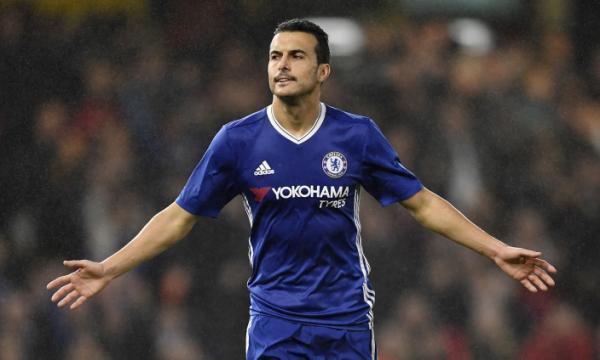 Pedro struck twice and Michy Batshuayi and Willian were also on target as Chelsea secured a routine 4-1 win over Peterborough United in the FA Cup third round, despite John Terry's second-half red card.

Antonio Conte rotated his squad for his first taste of FA Cup action, with captain Terry restored to the starting line-up, Kurt Zouma making his first senior start in 11 months and Batshuayi deputising for Diego Costa.

Chelsea went in front after 17 minutes of Sunday's tie at Stamford Bridge despite the changes, though, with Pedro thumping home after Luke McGee had saved Nathaniel Chalobah's powerful drive.

The Spaniard inexplicably hit the crossbar from close range, but Batshuayi did double the lead with a powerful strike following a clinical break for his fourth Chelsea goal.

Willian made it 3-0 early in the second half, before captain Terry - making his first Blues start since October - was shown a straight red card for foul on Lee Angol.

Tom Nichols provided League One Peterborough with the briefest hope of a comeback, only for Pedro to coolly score his second and Chelsea's fourth to round off a comfortable afternoon for the Premier League leaders, who returned to winning ways following their 2-0 loss at Tottenham last time out.

Chelsea consequently extend their run of not being eliminated from the third-round stage since the 1997-98 season, while Peterborough have not beaten a top-flight side since 1965.
The Blues survived an early scare when Asmir Begovic smothered Angol's poor effort from Marcus Maddison's right-wing cross.
However, Chelsea were soon causing problems at corners as Gary Cahill and Terry - making his 50th FA Cup start - forced saves from McGee.
McGee could do nothing about Chelsea's first goal, though. Chalobah's long-range strike was parried into the path of Pedro, who rifled the follow-up into the top-right corner after cleverly selling the defender a dummy.
Batshuayi and Ruben Loftus-Cheek were both denied by McGee, before Pedro somehow struck the crossbar from six yards.

But Chelsea were 2-0 up shortly before half-time. Loftus-Cheek laid Branislav Ivanovic's cross into Batshuayi's path and the Belgium striker angled his shot powerfully past McGee.

Batshuayi laid on a great chance for Loftus-Cheek two minutes after the restart, but the midfielder slotted his shot just wide.

That miss was soon forgotten as Willian extended the lead after 51 minutes. Peterborough's high line was exposed as Pedro raced clear down the left and he found Willian, who was given too much space to bend a fine finish across McGee.

Terry's clumsy foul on Angol saw the skipper earn a straight red card and Peterborough's hopes of an unlikely fightback were boosted when Nichols slotted home Michael Smith's cross to make it 3-1.

Pedro extinguished the visitors' chances with 15 minutes to go, however, stroking home from the edge of the area from Batshuayi's lay-off as Chelsea, who have lost just one of their last 35 FA Cup home games against lower-league opposition, cruised into the fourth round.