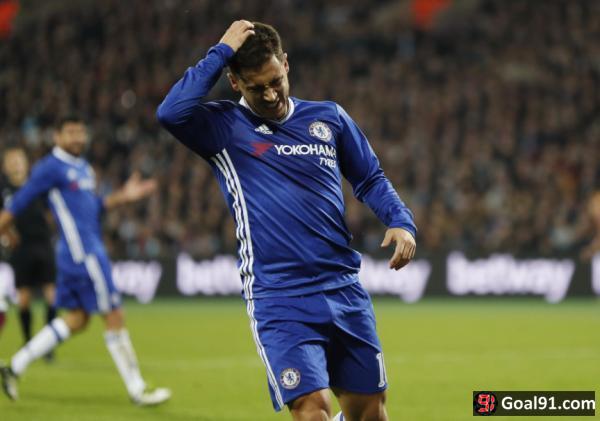 Well, the run of good results came to an end in the EFL Cup game against cross-town rivals West Ham United, but it could prove beneficial as Antonio Conte and Chelsea can learn from this result.

Facing a 3-4-3 system not dissimilar to our own, Chelsea were outplayed at West Ham’s new ground in a similar way to how the Blues dismantled Manchester United over the weekend.

Fatigue and a massive change in lineups look to be the main reasons for the disappointing defeat and show that the three-at-the-back system isn’t as bulletproof as once thought.

The return of John Terry was auspicious to begin with but his performance was a bad one in a mix of an altogether poor team display. The squad really did look to miss the likes of Marcos Alonso, Victor Moses, Eden Hazard and Nemanja Matic.

Willian and Oscar looked in awful condition having been given compassionate leave, and played the entire match as Conte seems to be putting his faith in them being able to perform once they’re back in form. But overall, they both had a game to forget and seemed to be on a different page from the rest of the team all evening.

It was miraculous that Chelsea even managed to pull a goal back at the death, because at certain points in the game you got the feeling that the Blues could have been out there all night and still wouldn't have scored.

After seeing a number of chances go begging in a thrilling clash with West Ham, Chelsea boss Antonio Conte conceded …

Everybody looked so far off the pace compared to the winning side against Jose Mourinho, it was a very bad indictment on the players that are not regular starters since the loss to Arsenal. The impressive run of game time without conceding a goal came to an end, and although the whole team was poor you do feel as though Asmir Begovic is almost guaranteed to let a goal or two in whenever he plays. It’s nice to give certain fringe players run outs during EFL and FA Cup games, but when those players can’t keep up with the manager’s demands they’re destined to fail.

Nathaniel Chalobah, Ola Aina and Michy Batshuayi were all given rare starts and all were substituted after disappointing efforts. The West Ham squad was basically a full strength one, almost like the one Chelsea beat on the opening day of the season, so it’s arguable the game was a bit of a mismatch, but these Chelsea players should’ve been up to the task.

Perhaps they were proving a point to Conte that the ultimate asset to a winning side is not just a clever formation, but also a vigorous energy to the game. Chelsea looked disjointed again like last season, there were so many errant passes and sad first touches of the ball, it was almost unwatchable.

With Southampton up next there has got to be a good hiding from Conte in the next few days to get them up to speed. Because if the Blues think West Ham were tough today, they’ll be in for a nasty surprise against the Saints.