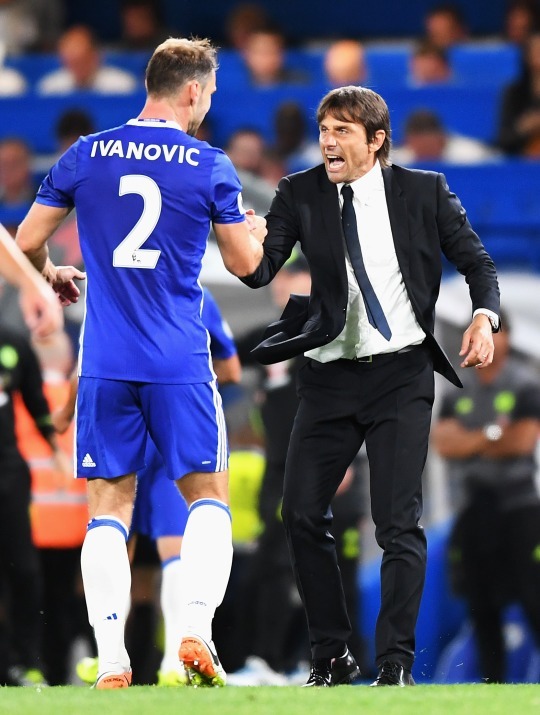 I didn’t know what to really expect from Antonio Conte taking the helm of Chelsea. I knew he was a serial winner with Juventus in Serie A and he was a hilarious spectacle during Euro 2016. I didn’t know how he would handle the job in London or how he would react to the challenges that have plagued the side for the past year.

It seems, though that he has a firm grasp on the happenings of the club as he has steered us to two wins in two games - both in spectacularly dramatic fashion. And not only does he seem in control, he seems to be enjoying himself as a part of the Chelsea family as well. It was fantastic to see him celebrate with the crowd at Stamford Bridge as Diego Costa hammered home the winner, and he was equal parts ecstatic and driven as he demanded his players get back to the centre circle after Batshuayi equalized at Watford.

Antonio Conte and Victor Moses celebrate the win over Watford

Against West Ham his Blues looked hungry and ruthless. Chasing every ball down and hassling everyone in claret and blue from front to back. It was a side without Fabregas in the line-up and as a result they were defensively sound, if looking a bit tepid in terms of creativity. It was Conte’s decision to put Batshuayi on in the final stages of the match that turned the game in Chelsea’s favor as it was his knock-down header for Diego Costa that won the game.

And against Watford, Fabregas was again left on the bench as Conte seemed to choose a more defensive mentality going into the match. N’Golo Kante was omnipresent against the Hammers and was so again against Watford. Hazard was looking in rip-roaring mood again. And Branislav Ivanovic seems to have put last year’s troubles behind him as best as he could. It wasn’t going as swimmingly as matchday one however.

A goal down, Conte knew he had to do something. Oscar wasn’t looking very sharp in attack, and Matic in an advanced midfield role looked as comfortable as a cat in a bathtub. So he turned to the only card he had left in Fabregas, and thankfully the Spaniard spent his 12-odd minutes on the pitch in most effective fashion.

Fabregas showed why he was such a game-changer when he first came to Chelsea, and how lethal his passing can be. First he found Hazard in space to create a goal-scoring opportunity for Michy Batshuayi, and then he played an unbelievable peach of a pass to Diego Costa to slide his finish under Gomes and snatch the win from Watford. In one fell swoop of a substitution, the game turned on its head and Chelsea were the victors.

Last year I lambasted Cesc for his lethargic defensive efforts and lacklustre contributions to the team. He looked unhappy being on the pitch, and those around him suffered as a result. Those 12 minutes in Watford showed that he still has quite a bit to offer. Even if it’s from the bench.

Conte has to decide how to field the next team - crucially deciding whether Cesc Fabregas should start or not. It’s risky to put him in the team if he shirks his defensive duties again - that’s why Oscar has the place ahead of him, because he has the pace and willingness to tackle back. It’s reminiscent of why Oscar was Jose Mourinho’s favorite child a few seasons back, it was his willingness to defend that gave him the upper-hand over Juan Mata, and now Fabregas is at risk of being the new Mata.

Conte seems to have faith in the old guard of Chelsea, though. Choosing to believe that you can teach an old dog new tricks. Ivanovic has kept his place in the squad, whether for better or worse remains to be seen, but we now know that young Ola Aina is a ready and willing substitute. And understanding the value of John Terry, despite his age.

I still think a few transfers need to happen before the window closes. Until Kurt Zouma returns, I am not fully enthralled with our centre-back situation. Signing Leonardo Bonucci would have been ideal. He has the ability to keep pace with most of today’s centre-forwards and also can play a damn good pass over the top.

Another point of concern is the left-back spot - currently held by Azpilicueta. Ivanovic has played 180 minutes without much incident, but it’s a tenuous situation to rely on him after his shambolic form last year. It’s all gone well so far, but I fear he may relapse at any moment, and that’s a problem Chelsea must prepare for. Baba Rahman was deemed too offensive, and was shipped off on loan, and for the time being, Ola Aina seems to be enough for cover.

Conte has shared my sentiment for acknowledging the need for a few more signings, and I trust he will be shrewd like he was with signing Kante and Batshuayi. Kante looks an absolute gem and already is my predictive pick for player of the season come May 2017.

Things are indeed looking up at Stamford Bridge once again.